Stavropol Territory is located in the South of the Russia’s European part, in the Pre-Caucasian area. The biggest part of the Territory is covered with steppe and semidesertic natural zone; 1.5% of the territory is occupied with broadleaved and woodland forests. The climate is continental; the average temperature in January reaches 4-10 Co below zero, the average temperature in July – 22-25 Co above zero; the annual rainfall is 300-800 mm. Stavropol Territory is divided into the lowland and waste plain. The ground within the Stavropol Terrutory is mainly divided into chernozem soils and chestnut soils. Approximately 2,450 supreme tracheophytes plants of wildlife species grow within the Stavropol Territory. Despite the fact that this territory is situated in the steppelatitude, plants of the European forests, as well as from Western-Asian semideserts and deserts, can be found here, too.

Initially the problem of nature protection of the North Caucasus was considered in the late 80s and early 90s of the 19th century. The scientists of that time tried to find ways to control desertification of the Stavropol Province. The scientific study of grassy vegetation was implementedonly in early 20th century, when I.V. Novopokrovskiy, V.N. Kononov, V.G. Tanfiliev, E.A. Bush, A.A. Grossgeim, A.I. Galushko and others carried out a research and described some regions of the Stavropol area and the North Caucasus. Nevertheless, it was not enough to study the local, it was necessary to reinstate ploughed up grazing lands and logged forest areas.

Stavropol Botanic Garden was established in 1959. Its work was mainly focused on introduction, research, rational use and preservation of flora. Nature-oriented activity of the Botanic Garden was aimed at flora preservation through working out the methodology of its reinstate. In the 60s to 80s of the last century, V.V. Skripchinskiy was the research advisor of the expeditions in the Stavropol Territory. Invaluable contribution into the research of Stavropolye flora, including rare species, was made by such outstanding scientists as V.G. Tanfiliev, V.V. Skripchinskiy, Y.A. Dudar, D.S. Dzybov, G.T. Shevchenko and others. V.V. Skripchinskiy was in charge to collect rare and endangered species of plants in the USSR in Botanic Gardens. More than 400 taxa, mainly geophytes were grown in the exhibition area. In the 1990s, due to some circumstances, the problem of rare flora species research was no more of primary importance. In this respect, U.N. Gorbunov and M.L. Orlenko are worth citing: “For the last decade they start to understand that biological diversity lays the basis to support ecological condition of the existence and economic development of the human society”. Currently, the state nature conservation programme of rare and endangered species of local flora has been stated by law. The environmental monitoring research of rare and endangered species across the territory of Stavropol Territory has been started since then.

The scientific research to define the area of the growth for the rare and endangered species of plants was carried out across the protected zones: “Kutsai” Mountain, “Bryck.” Mountain, “Bazhigan” (nature reserve), the outskirts of Blagodarny town, the “Velichaevskoye” village (Fig. 1 - 2). The subjects of investigation are 22 rare species which are included to the Red Data Book of the Stavropol Territory, Ivanov, (2013). 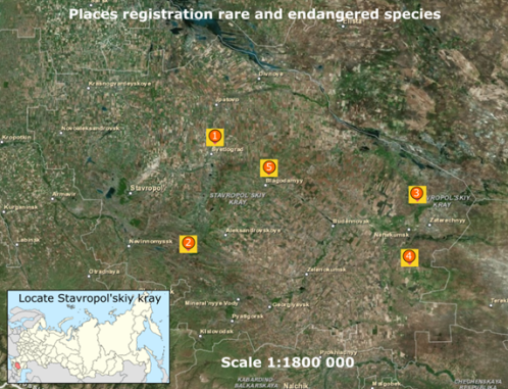 The process of local population search was carried out referring to the results of the previous scientific research and references. To define the population area and its coordinates, GPS techniques were used. Transect method was used to set up the permanent plots across the whole territory where a population was found. The size of the permanent plot was nine square meters. To specify the capacity and the total viability population in real-life conditions it was necessary to set up the area size of the population which was found by means of GPS technologies based on identifying the source coordinates of some points according to the self edge. A population is the total number of particular plants within the territory covered with population. We can differentiate three main types of the population structure: even structure, accidental structure and group species distribution. The viability of population is determined according to the following rating scale: 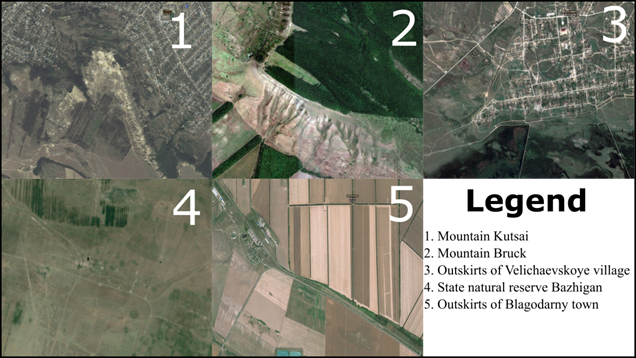 The abundance of species Cenosis is determined according to Drude’s scale:

For the last five years the research of the following mostly preserved state and local areas has been carried out (Table 1):

Table 2. Research results of some extremely protected zones across Stavropolskiy Kray in 2011-2013 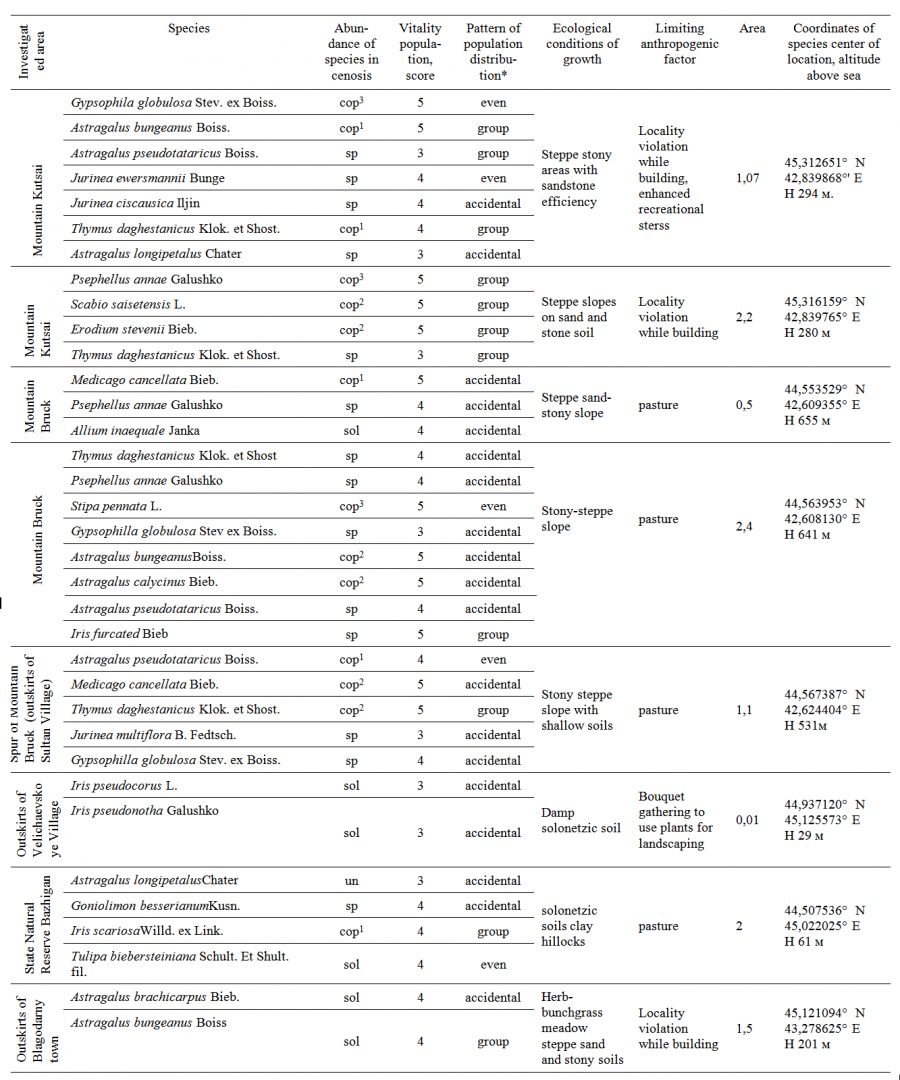 The present article covers results of a monitored research conducted in 2009-2013 (Table 2, sample 1-2). According to the results of this research, we can conclude that there is approximately the same population of rare and endangered species in steppe stoned areas with sandstone and in stone-steppe slopes with small grounds. These are Astragalus bungeanus Boiss., Thymus daghestanicus Klok., Jurinea ewersmannii Bunge, Astragalus calycinus Bieb., Gypsophila globulosa Stev. еx Boiss., Psephellus annaeGalushko, Astragalus pseudotataricus Boiss and others. Thus, we can speak about two kinds of extremely preserved natural areas: Kutsai Mountain and Bruck Mountain. Referring to the population analysis of taxa examined we can conclude that it is necessary to pay more attention to rare and endangered species and species with relatively high degree of population that are currently decreasing rapidly. These are the species of the I and II categories, Borodin, Bannikov, Sokolov & AL. (1984), Panasenko, Ivanov, Sigida, (2002). As a rule, these are the I and II populations with a relatively small number of species of Iris scariosa Willd еx Link, Goniolimonbess erianum Kusn. («Bazhigan»), Astragalus longipetalus Chater («Bazhigan» and Kutsai mountain), Jurinea ciscausica Iljin (Kutsai mountain), Medicago cancellata Bieb. (Bruck mountain), also species with the narrow ecological plasticity, Sobolevskaya (1984). These are Thymus daghestanicus Klok. et Shost., Iris pseudacorus L., Jurinea ewersmannii Bunge, Erodium stevenii Bieb., Scabiosa isetensisL., Astragalus brachycarpus Bieb and with the weak population viability (low reproductive ability and vegetative mobility). The results of our research proved the lack of juvenile individuals of Astragalus longjpetalus Chater, Iris pseudonotha Galushko, Goniolimon besserianum Kusn. It would be luseful to cultivate them in conditions resembling their natural habitats. There is no concern in respect to the endemics of Stavropolskiy Kray flora Psephellus annae Galushko, and Astragalus bungeanus Boiss., within the limit of the area and Astragalus calycinus Bieb. from locus classicus.Within the territory of 21 subjects of the studied species, the majority of them (44%) occurs quite abundantly, 34% of species is distributed in small quantities, 19% – for single and 3 % – found in one. Generally, vitality of the population reaches 4-5 points, i.e. plants look normal in developed vegetative part, almost all flower and fruit. The main limiting factor in the study area is grazing on dry meadows and steppes. This calls for further monitoring and development of passive and active methods of protection for natural regeneration. The Stavropol Botanical Garden created a collection of rare and endangered species, which numbers 150 taxa. It carried out a study of their decorative qualities and adaptive features in culture. The Botanical Garden is conducting research on the state of rare plants in the conditions close to natural – using an artificial forest.

Further study of the rare species in the arid zone of the Stavropol Territory is necessary to create new protected areas.

All species examined are well-developed in a vegetative way; they are flourishing.

Isaenko T. N. 2011: Programme and methodology of scientific research to organize and carryout the monitoring of population of rare an dendangered herbaceous plants of Stavropol region, collection for mationin 2011-2015. Published at Stavropol Botanic Garden. 17 p.