The viability of pollen in some species of Berberis L. in Absheron conditions

The scientific analysis of the introduction and adaptation species of genus Berberis in the Absheron condition is one of the key determinants of the adaptation of the species to the new environment at individual stages of development (Mammadov, 2015). Determining the viability of pollen is main factor of obtaining high quality seed from the species studied.

The aim of the research is to study the viability of pollen some species of genus Berberis introduced in Absheron.

We analyzed the viability and germination of pollen in 9 species of berberis in 2018-2019, for the first time in Azerbaijan in the collection area of ​​the Institute of Dendrology. Methods I. N. Golubinsky (1974) were used in the study to determine viability of pollen.

Specimen for studying pollen viability were taken from plants grown at the Dendrological Institute. In the studied Berberis species, live and dead pollen were visualized using staining with acetocarmine and iodine under a Nikon eclipse E100 and AmScope microscope in laboratory conditions.

In the study of pollen viability, measurements were carried out with the germination of 10-30 % sucrose solution at 240 C. The sprout length of the pipe was measured with a microscope (Erdtman, 1952; Vinogradova, Kuklina, 2016).

Тhe difference in the stages of the phenological development of the Berberis species was observed for 3-5 days over many years, depending on meteorological indicator in Absheron conditions. 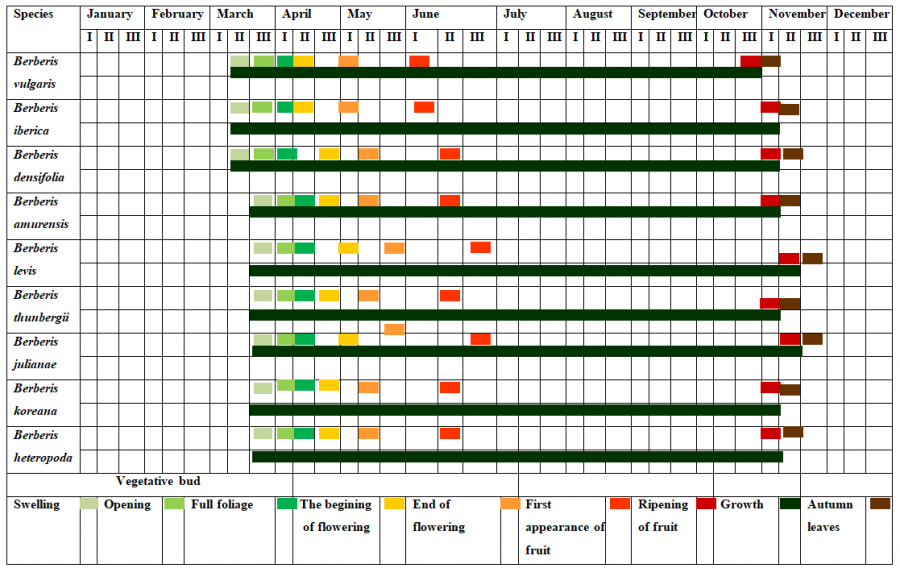 In Berberis species, pollination is cross. The first and fully opened flowers were taken from the main plant in the morning and placed in a paper bag. The area, location of the plant and the pick time of flowers are written on a paper bag.

Pollen fertility and sterility were determined under a microscope in 3 repetitions at 8-10 in vision. Pollen protoplasm with normal viability turns dark red (fertile pollen) under the influence of a dye - acetocarmine and iodine. Sterile pollen which couldn’t have viability remains colorless or light yellow. A nutritional condition was prepared using 5–25 % sucrose solution to study the germination ability of pollen. In the study, 1 drop of nutritious substance and pollen were placed on the sterile glass slide. Then it is softly mixed with a glass rod and covered with a glass coverslip. A glass slide is placed on wet filter paper and placed inside a Petri container.

In Berberis species, pollen is light yellow, elliptical, round or oval, and many pollen are combined in a spiral. The meridional diameter of the pollens was 40-56 mcm and the equatorial diameter was 23-34 mcm. As shown from table, Berberis vulgaris, Berberis densifolia, and Berberis julianae species were observed large size pollen by meridional and equatorial diameter: 52 ± 4 mcm - 56 ± 4 mcm.

The results of the study on the viability of pollen are presented in Table 1. The viability of the pollens is calculated by the acetocarmin and iodine staining. Accordingly, the studied species was divided into 3 groups:

Table 1. A study of pollen viability in some species of Berberis

The length was measured using an ocular micrometer (approximately 20-30 pieces). Thus, the size of the pollen tube in germinating pollen was larger than the diameter. Most of the pollens dispersed into the nutrient surroundings and were germinated. The process of germination was followed continueusly by a microscope.

In the studied species, the first and mass flowering is observed in April - May. Normal temperature and humidity during this period provides the necessary conditions for complete and normal pollen ripening. In July, an increase in air temperature and arid climatic conditions led to short-term flowering and a decrease in the life expectancy of pollen by 20-30 % during this period.

Usually, pollen produced under normal conditions in plants is of high quality and their germination is close to 100 %. Atmospheric pollutants, however, reduce the rate germination of normal pollen.

The results of the study showed that the pollen of the Berberis species grows better in 20 % sucrose solution and varies from 25.3 ± 4.5 mcm to 68.0 ± 10.0 mcm. The viability of pollen in the nutrient surroundings is a biological process and one of the key indicators of high quality seed production.

I express my gratitude to the director and employees of the ANAS Institute of Dendrology for their support during my research.