In this research paper, the impacts of the recent observed coherent climate change and variations on the species of Pinus eldarica and Gleditsia caspia Desf. which were grown within the natural and agrarian conditions on the pilot plots of the Institute of Dendrology of Azerbaijan National Academy of Sciences (ANAS), and accordingly their scales of endurance and fortitude against these cirsumstances as well as the subsequent level of damage and the sequences of the processes that were going on within the aforementioned plants, were analysed by the use of transmitting sonic impulses into the trunks of the certain trees. Furthermore, the acquired outcomes and directions of eliminating causes that prevent the develoment of the species by the use of transmitting sonic impulses into their trunks, were fetched into light. And it clearly appeared that via this beneficial methodic way, the plants can have not only a sturdy trunk, but also longevity.

The research paper is based on the experiment on the species of Pinus eldarica Medw. and Gleditsia caspia Desf. which were grown on the pilot plots of the Institute of Dendrology of ANAS. In order to assess the location and size of defects inside of the tree trunk, 2D imaging sonic tomography equipment (Arbotom®) by Rinntech (Heidelberg, Germany) were used. The sonic impulses were transmitted to the tree stems via the aforementioned apparatus and the procured results were conveyed into a computer by a specific software. The major feature of the above-stated device is that it does not cause any harm to the tree, on the contrary, it predicts any deterioration within the trunk of it. Various colorful lines which show sensitivity of different stress waves that are being obtained from Arbotom®, display the defectiveness. To ensure the optimal quality via Arbotom® software, we can utilize two-step filter which detects the rottenness in advance and so precludes any possible ravage of the tree. By detecting the discrepancy of radial and tangential motion velocities, Arbotom® standardizes and reflects them on the tangential graph. Via annexing values into the tangential graph, the affecting parameters to the tree species are being evaluated. The position of a stress wave in each tomography pixels was carried out based on a specifically designed programme by the utilization of Borland C ++ device. Subsequently, the tomogram was forwarded into an MS Excel file. 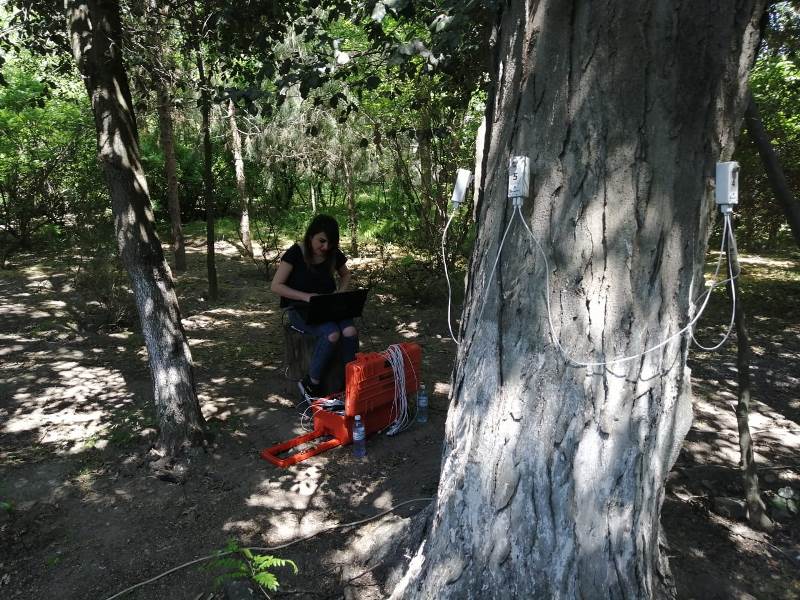 Eldar pine (Pinus brutia var. eldarica (Medw.) Silba) which is an endemic plant of Azerbaijan, is largely spread around a small area in the grove of Eldar that is located on the western side of the Eldar plain. This tree which can naturally reach up to 21 metre-tall, is a conifer, and its leaves are green, jagged-edged, and needle-shaped.

Caspian locust or the Three-thorned Gleditschia or Honey locust (Gleditsia caspia Desf.) is spread over the mountainous part of Lankaran and in the Lankaran lowlands as it is a demanding plant for humidity and heat. Nevertheless the foregoing, it also has resistance to salinity and water scarcity.  The diameter of Caspian locust can reach 60-80 centimetres.

Five sonic impulses with a 30 cm intervals from each other were attached to the first examined tree’s (Pinus eldarica) trunk on 60 cm tall from the ground (Fig. 1).

Table 1. Tomography of Eldar pine’s trunk by the use of arbotom. 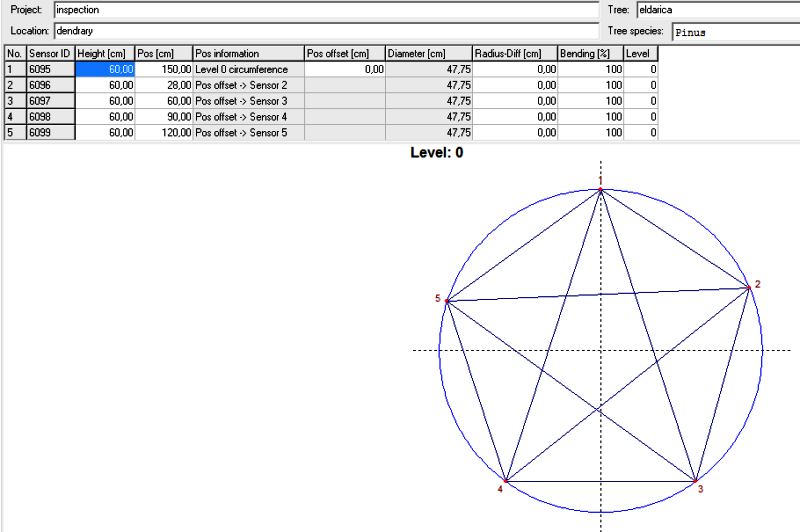 High sensitivity of the plant under fragmentation in the early stages have been shown by sonic velocity.  In addition, visual tree calculations have been evaluated by sound waves. In general, tomographic measurements allow for the reconstruction of a part of the object by measuring the energy transmitted by the object itself (Stewart 1991). Detection of internal dispersion by acoustic tomography and the location of defects, dimensions of their sizes, shape and features have been analyzed. The tomography of these trees by transmitting the sonic impulses of the Arbotom device to the stems of the tree, revealed along not also the impact of climatic factors on the tree’s development, but also negative effects of the ordinary ivy which parasitizes on the tree by living a symbiotic life.

The results of the research are presented in Table 1. As a result, the average diameter was kept as 47.75 cm. Sonic of Arbotom device have been reflected on the computer monitor’s special program.

Small samples of tree density and stress wave velocities were calculated and evaluated by the certain position of a 2D tomographic image. An sonic signal is converted into a stress wave pulse which passes through the tree via a transmission sound, and is admitted by a receiving sound, and afterwards it transmits an sonic signal which can be reinforced or  displayed. According to the results, decay has already begun on the part of the trunk where two and three were marked,  and rottenness has already aggravated in the part of three and four.  If we contemplate the tree meticulously, we can see that ordinary ivy have moved inside of the tree and parazites there by progressing through the stem of it (scroll down for Fig. 2). 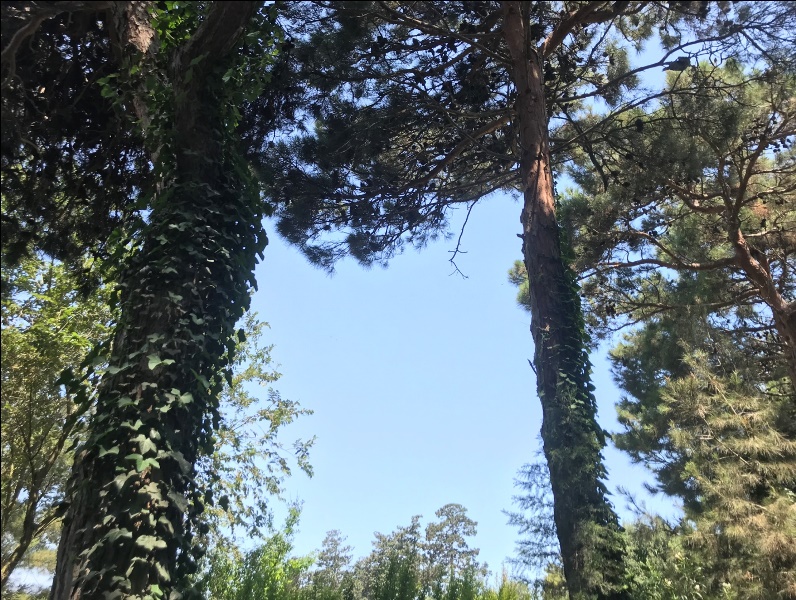 Fig.  2.  An example of symbiotic life of Eldar pine together with ivy.

Consequently, there is an acute deterioration in the mentioned part of the tree. Thence, it evidently demonstrates that the process of decay is not occurring in the sections of two and three where the sonic impluses are occurring but it started and intensified in the parts of three and four and expanded towards the sides and so the area of rottenness have been dilated (Fig. 3).

If we pay enough attention to the conductivity of the impulses, we can obviously see that the conductance between three and four is dark pink (Fig. 4).

The Arbotom appliance was also added to another Eldar pine which is on the left side of the current Eldar pine for elucidating if the climatic factors have an influence on the deterioration processes or not. Although sonic impulses were still attached with an interval of 30 cm from each other, the height was relatively on an elevated level, 130 cm tall from the ground. The top of the device is being bound to the trunk of the Pinus eldarica’s body on the right side. It is clarified according to results indicated on the monitor that the right Eldar pine has a better progress on the eastern side. Nonetheless, a slight decay process has commenced on the other side (Fig. 5).

If there is no any step to prevent the rottenness, it will spread all around the other fine parts of the  tree and destroy it. Hence, we can tell that wind flow velocity from climatic factors plays an ipso facto important role in the growth and development of tree (Fig. 6).

The following specie that has been examined on the territory of the Institute of Dendrology of ANAS is Caspian locust which is located among trees on the top of the area which is a shadowy spot as umbrella shield of the tree tops obstruct the light. The primary aim to examine this specie through Arbotom tomography via transmitting sonic impulses is to realize if the decay process on the ground part of this tree has been expanded to the inner part or not. Considering the fact that the trunk part of the tree is thicker and wider, the number of the sonic transmitters has been increased from five to ten. Accordingly, the average diameter became 98.68 and so the deterioration inside of the large hollow which is visible from outside, has been divulged (Fig. 7). 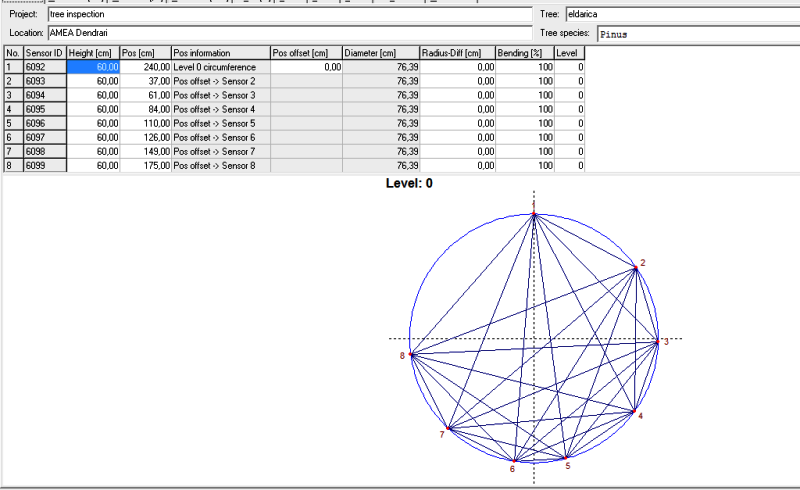 First and foremost, the probes were attached on the 10 cm height. Unlike the previous examinations, the intervals were counted up at different sizes.

The interior tomography has been examined by an Arbotom device as the upper part of the body is still healthy. The sonic transmitters were attached with a different interval as the second probes had been affixed on the 60 cm height from the ground. Since the trunk is getting narrower towards the upper part, the average diameter has become 76.39 cm. The following table displays the obtained results (Table 2).The outlook which appeared while transmitting the sonic impulses, demonstrated that the decay process was not abundant even though there was a slight rottenness towards the upper part of the tree (Fig. 8).

Correspondingly, it can be mentioned that a hollow appeared in the trunk of the tree because of any possible reasons (climatic factors, disease-causing insects and pests, etc.), and by time it grew and turned into insect habitats and eventually, the tree has started to internally perish. Notwithstanding the fact that  the top part of the tree has developed in a regular way and is rich with leaves, some branches have already went dry. Thence, the tree will ultimately be destroyed if the deterioration cause is not eliminated.

The Republic of Azerbaijan as well as the territory of the Institute of Dendrology of Azerbaijan National Academy of Sciences (ANAS) is opulent with an excessive number of tree species.  Despite of the fact that these trees which are over a hundred years old, charm people with their outer stances, climate variations and change and also some ecological factors observed in the environment, triggers the process of decay in them. Nevertheless, the sequence of the processes within the plants and the damage levels can be ascertained via tomographic analysis by transmitting electrical impulses which aim to prevent decay processes that are developing within the certain plants. By identifying the core impacts and other environmental factors that cause deterioration within the plant throughout the years, we can eliminate the mainsprings that impede the growth of the plant by engendering malady in it. In order to elicit disparity between the tree density and stress wave velocity inside of the disc, 2D tomographic images were revealed by the Arbotom system and whereupon small-scaled samples (30x40x70 mm) were cut off the trunk discs of the species of Pinus eldaica and Gleditsia caspia Desf. which are capable of one visual pattern recognition. On the purpose of discerning the location and size of the deterioration within the conifers, sonic tomography was used for examining the tree crossings.Detection of internal dispersion by acoustic tomography and the location of defects, dimensions of their sizes, shape and features have been analyzed. Eventually, this will help the trees to have a sturdy trunk as well as a longer lifespan.

The Arbotom®  (Rinntech Inc., Germany) which is a tomographic analysis equipment for a tree trunk via electrical impulses, have been used in the research. High sensitivity of the plant under fragmentation in the early stages have been shown by sonic velocity. Arbotom is a significant apparatus that has a crucial role to help us to ascertain a deterioration process and rottenness within the interior parts of a tree that are invisible to observe from an outer view. Via tomographic analysis by transmitting electrical impulses which aims to prevent decay processes that are developing within the certain plants, we can assuredly save in abundance of lives in the mother nature ere it is at the breaking point. In addition, visual tree calculations have been evaluated by sound waves. In general, tomographic measurements allow for the reconstruction of a part of the object by measuring the energy transmitted by the object itself (Stewart 1991). Contemplating the pervasive impacts of the trees on human welfare and natural equipoise, it is our paramount duty to protect and take care of them and Arbotom prominently conduces toward the actualization of this sublime mission of ours.

I am great thankful to Prof.Dr. Tofig Mammadov on helping me in laboratory research.